Our father of faith Abraham was promised a son by God, but it incurred an outstanding contradiction against what God had promised, and both Abraham and  Sarah his wife  had to overcome it by faith. After their  first attempt in the flesh failed because of unbelief, God visited Abraham a second time, and  he saw and accepted God's way of faith to realize the vision.

Both Abraham and Sarah were immediately inducted  into the "war of faith" against all contradiction. They fought the good fight of faith resulting in victory. Abraham was 100 years old when Sarah, at 90, conceived  by faith and physically had Isaac according to the promise of God.
Abraham is known according to the scriptures as our "father of faith."

Job was a covenant  man of God whose biblical account  inspires the believers in Christ to contend for overcoming faith.  Because he was the most righteous and God-fearing man in his times in the land, Job had a living testimony concerning God's covenant of  divine  health, wealth and  prosperity, and a family (Job 1). However, it was soon devastated by satan, the destroyer who reeked incomprehensible  havoc and calamity in an attempt to cause Job to forsake his faith in God.
Job overcame  by trusting God in spite of  the contradictions that  assaulted him.


Like Joseph, the dreamer, many of you are in the prophetic process of training for reigning and for overcoming everything that has come against you   Many times what looks like a contradiction  is really a tool of blessing that God uses to  get you aligned to the right door  of favor  and  opportunity.

How could  Joseph's wrongful imprisonment, and being forgotten there for two years, launch him into God's calling  for his life?  Joseph's imprisonment positioned  him for his launching in God's perfect timing.  Joseph was remembered according to his gift, and he was asked to  interpreted  Pharaoh's dream in the throne room -- and the door of his destiny was opened for Joseph the dreamer to step into his own!

You may be among  the many believers in this hour who are contending for what God has promised them in His Word, concerning  their calling, career  or destiny. When such promises,  dreams, and visions are  given by God -- as we have seen from the example of Job who said "though He slay me I will trust Him" -- one must  take that kind of quality trust in God, and put that stake in the ground and STAND  against all contradiction.


AGAINST ALL CONTRADICTION - - STAND!

At church yesterday, as of this writing, the congregation was instructed after worship  to convey what the Lord had spoken to their heart to the one sitting next to them. I heard nothing, but I was impressed to speak scripture, as He willed, out to my husband. I heard myself saying to him, "Trust the Lord with all your heart, and lean not to your own understanding."  ( Prov 3:5) 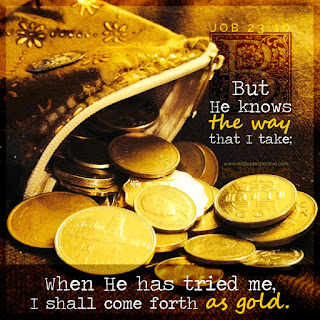 It so happened as I put the finishing touches on this post this morning, I looked up on my shelf at the plaque sitting on my desk shelf. But this time the same scripture jumped out at me! When you water someone with the word you in turn   will get watered! God always confirms His Word.
Lastly, looking again at Job,  we read that the Lord responded to Job's season of contradictions  in his trial. In Job 38-42, the end of the book illustrates to us the spiritual truths to apply to endure seasons of contradictions. The benefits that you can reap when STANDING against all  contradictions are :


God is no respecter of persons. Whosoever is preparing and believing God's  promises concerning their  calling, ministry, career, health, wealth, family, or what ever you have been promised in His Word, continue to be willing and obedient in acting on  the scriptural principles of wisdom and with the revelation of standing against all contradictions of  faith...for  your captivity to all contradiction is about to be turned.